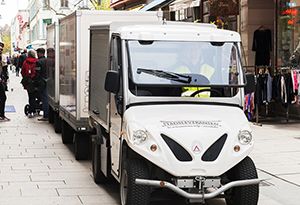 UK – WORLDWIDE – Regular readers will be aware of the rapidly changing face of urban logistics, the last mile challenge which faces all road haulage operators and courier services is a problem growing ever more complex as congestion in cities peaks during normal working hours, and globally a plethora of solutions, some extremely controversial, are being trialled by various local authorities and those in the business of delivering freight to the wider community. In January the United Kingdom Warehousing Association (UKWA) commissioned a study ‘Feeding London 2030’ specifically aimed at bringing the subject to the fore and now Craig Ryder, a director of Go Supply Chain, a logistics management and advisory consultancy, has succinctly covered both the causes, and some potential solutions which, together with a degree of our own input, follows:

Urban congestion, created by both road freight and passenger vehicles, means slower speeds resulting in longer trip times. Factors are mounting to make congestion a critical urban logistics issue, not least the rapidly expanding urban population. The latest ONS figures reveal a 3.4% growth in UK city regions between 2011 and 2015 compared to a 2.5% growth in the rest of the UK. London, which stands apart as a global ‘megatropolis’, grew by 5.7% – twice the national rate and is forecast to be knocking on the door of 10 million residents by 2024.

Londoners, for example, are living and working in an increasing number of buildings converted into multi-tenanted developments and new, mixed-use skyscrapers. The communities within these densely populated buildings generate multiple deliveries, but often lack a consolidated loading bay and internal delivery system, resulting in delivery drivers parking a variety of vehicles, often inconveniently for all concerned, while making time consuming treks to find the right apartment or office.

The huge corresponding shift in retail dynamics and purchasing habits has seen the numerical growth of convenience stores and fast food outlets supported by little and often deliveries. Then of course there is the e-commerce revolution that has made free, next day and same day delivery the new norm. To deal with all of this, many retailers are operating large distribution centres outside cities as hubs, which deliver to smaller depots within the inner city. From there, the last mile becomes the most challenging and expensive portion of the delivery journey.

Delivery vans can of course negotiate the obstacles of urban deliveries better than large lorries but lack their economies of scale, thus there are more on the streets. According to Department of Transport (DoT) road traffic estimates for Great Britain, a decline in lorry traffic on urban roads (a reduction of 0.8 billion vehicle miles between 2000 and 2016, has been offset by a corresponding increase in van traffic on these roads (an enormous increase of 4.5 billion vehicle miles over the same period).

To meet this logistical challenge there is, however, a smorgasbord of interesting ideas and trials taking place around the word that are specifically targeted at reducing congestion and helping to overcome the last mile challenge. These not only include such truly experimental concepts such as delivery robot courier services and ‘When I Was Out’ drop boxes, but also a variety of different available weapons which are either being tested or introduced as a permanent partial solution. These include:

In Germany and the Netherlands DHL has cooperated with Smart to utilise customers Smart cars as a delivery receptacle as covered here, whilst in Berlin, courier service Messenger Transport + Logistics has rolled out the BentoBox as part of the Berlin citylog project. This transportable storage locker can be loaded with parcels and then dropped off at a central depot after working hours. The courier deploys cargo bikes to achieve quick, cost efficient, emission free and almost silent distribution of the goods to the depot for customer collection the next day.

TNT is doing something similar in Brussels, one of the most congested cities in Europe. Its mobile depot is a trailer that contains a large number of parcels. It is towed to a central location in the city after peak traffic has subsided. Last-mile drivers deliver the parcels in small electric or human-powered vehicles. According to a report by the EU-funded research project CycleLogistics, an estimated 51% of goods transported in cities could be shifted to bicycles and cargo bikes, significantly reducing emissions and congestion.

The Cubicycle, developed in the Netherlands in association with DHL, has taken ease of delivery a step further. This express delivery vehicle has a reclining seat for the courier that allows for greater comfort, safety and speed. Electric pedal assistance helps when climbing hills, and it is easy to handle, with a tight turning cycle. DHL has launched two pilots of this City Hub concept— one in Frankfurt, Germany’s fifth largest city, and another in Utrecht in the Netherlands, which recently announced the target of becoming climate-neutral by 2030.

Many of Gothenburg’s streets are now pedestrianised and parking is severely limited. Restrictions mean that normal deliveries with vans and lorries are only allowed between 5 am and 10 am on the main streets, a solution which may be the most effective weapon in the war against congestion. Private transport companies are encouraged to leave their packages at a freight consolidation terminal from where Stadsleveransen’s (the City Delivery) fleet of two electric cars and two cargo bikes carry the goods the final few kilometres. The Swedish city has an 800-kilometre network of bike paths, including reduced-speed mixed zones.

Meanwhile an electric powered bike and walker trailers to deliver packages is undergoing live trial testing by UPS in the City of Westminster. The system is an extension of a model developed in Hamburg in the past few years. Its innovation is that the weight of the trailer is not felt by the handler, allowing for increased last mile deliveries by foot or cycling. Six trailers can be dropped into a busy city centre by a single van, allowing the trailer system to easily cover a large urban area.

In addition to alternative transport modes, technology can be deployed to reduce traffic. For example, parcel tracking systems can automatically send customers a text message to inform them of an imminent delivery. This enables customers to meet couriers at their door, minimising the time that a truck has to idle outside creating congestion by either double parking or cruising the immediate area in search of a loading bay or parking spot.

It is helpful to identify traffic hotspots i.e. roads where congestion forces drivers to drop their speed by 65% for at least two minutes. During September 2016, data analysis company Inrix monitored traffic on every road in 123 cities including London, Cardiff, Paris and Hamburg. It found more than 20,300 so-called ‘traffic hotspots’ in UK cities – well over double the number in Germany and twice that of France.

Efficient route scheduling and load optimisation systems are well known to the logistics sector as being helpful in finding the most efficient delivery routes and reduce partial or empty loads – some 30% of truck journeys are empty in the UK. Many are looking to autonomous vehicles to contribute to more efficient traffic flows. These self-driving machines, equipped with ‘intelligent’ mapping systems and connected to a vast pool of data stored in the Cloud, will be able to anticipate congestion and dynamically reroute accordingly, ensuring that the optimum route is always followed.

Delivery will be speeded up if it can be switched to less congested ‘out of hours’ periods. In London for instance, the majority of deliveries and freight journeys normally take place between 07:00 and 11:00 when the roads are busiest. During the London 2012 Olympic Games, however, many businesses avoided disruption by changing the times of their deliveries.

A collaborative approach can reduce the number of different delivery vans clogging up the same street. An example of this is the appointment by the Crown Estate of 3PL, Clipper Logistics to operate the Regent Street delivery consolidation scheme. The company worked with retailers on Regent Street and in the West End to bring together deliveries despatched from a single consolidation centre. The centre brings together consumables from all suppliers to one easily accessible point outside the congestion charging zone, combining deliveries with other West End companies to streamline a previously complex and inefficient system into a simple and effective one. The system has allegedly reduced vehicle movements to participating stores by up to 85%.

Other ideas have been tried to improve congestion on major roads within towns and cities, with a limited amount of success including: High Occupancy Vehicle (HOV) lanes to promote car-pooling; reversible lanes, applied at peak periods on busy routes; tolls and congestion charges. All these measures can alleviate the problem but will not solve it. Congestion is partly the result of governments not being able to reconcile demands for road use with the available supply.

Transport for London (TfL) is taking a lead by encouraging logistics companies and transporters to develop a Delivery and Servicing Plan (DSP) that should help individual firms manage their deliveries better and save money as a result. TfL will use these voluntary plans to provide input for urban planning and road network projects.

One thing is for sure, without action congestion in cities will make it increasingly more difficult to fulfil everyday life in the manner that everybody has come to currently expect.