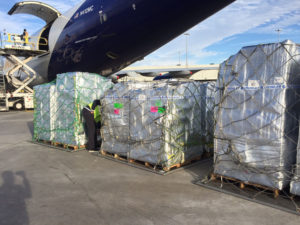 IATA has published statistics covering global air freight markets in February 2017 that reveal there was an 8.4%
increase in demand, as measured in freight tonne-kilometres (FTKs), compared to the same period of last year.

After adjusting for the impact of the leap year in 2016, global airfreight demand increased by 12%, the trade body

Airfreight capacity, as measured in available freight tonne-kilometres (AFTKs), was down by 0.4% in February.

“The continued growth of airfreight demand in 2017 is consistent with an uptick in world trade which corresponds with new global export orders remaining at elevated levels in March,” an IATA statement asserted.

Of particular note, it continued, were the increased volumes of semi-conductor materials typically used in high-value consumer electronics being flown.

“Demand grew by 12% in February – about four times the five-year average rate. With demand growing faster than capacity, yields got a boost.

“While there are signs of stronger world trade, concerns over the current protectionist rhetoric are still very real,” de Juniac added.

The rapid growth of businesses such as cross-border e-commerce and time- and temperature-sensitive pharmaceutical are currently enjoying robust growth. “Any optimistic look at the future sees growing demand for specialised value added services,” de Juniac noted.

“Shippers are telling us that the key to turning the current uptick in the cargo industry’s fortunes into longer-term growth is modernising our antiquated processes,” he continued.

“We must use the current momentum to push ahead with the elements of the e-cargo vision – including the e-air waybill which is nearing 50% market penetration,” he concluded.

All regions except Latin America saw an decrease in demand for airfreight capacity in February when compared to the same month of 2016.

•   Asia-Pacific airlines posted the largest year-on-year demand increase, with freight volumes growing by 11.8% year on year (by more than 15% when adjusted for the leap year). Capacity meanwhile increased by 2.0%. The increase in demand has been captured in the positive outlook from business surveys in the region and has also been reflected in the increase in trade across Asia Pacific’s main freight lanes to, from and within the region, which have strengthened considerably over the past six months, IATA said. Seasonally-adjusted volumes dipped slightly in February but are now back to the levels reached in 2010 during the post-global financial crisis bounce-back.

•   North American airlines’ freight volumes expanded by 5.8% (or more than 9% when adjusted for the leap year). Capacity decreased by 3.1% year on year. The Improvement in freight volumes was driven in part by the strength of freight traffic to and from Asia. The further strengthening of the US dollar continues to boost the inbound freight market but is keeping the export market under pressure, IATA noted.

•   European airlines posted a 10.5% (or around 14% adjusting for the leap year) increase in freight volumes in February, and a year on year capacity increase of 1.4%. The ongoing weakness of the Euro continued to boost the performance of the European freight market, which has benefited from strong export orders, particularly in Germany, over the last few months.

•   Middle Eastern carriers’ year on year freight volumes increased by 3.4% (or approximately 7% when adjusted for the leap year), while capacity decreased by 1.7%. Seasonally-adjusted freight volumes continued to trend upwards and demand remained strong between the Middle East and Europe. Despite this, growth has eased from the double-digit rates which have been the norm over the past ten years. This corresponds with a slowdown in network expansion by the region’s major carriers, IATA pointed out.

•   Latin American airlines experienced a contraction in demand of 4.9% (or around 1% adjusting for the leap year) in February compared to the same month of 2016. There was a decrease in capacity of 7.2%. The recovery in seasonally-adjusted volumes also stalled, with demand 14% lower than at the peak in 2014. And freight volumes on the region’s carriers have now also contracted in 25 out of the last 27 months. Those airlines have managed to adjust capacity, however, which has limited the negative impact on the load factor. Latin America continues to be blighted by weak economic and political conditions.

•   African carriers’ saw freight demand increase by 10.6% (by more than 14% adjusting for the leap year) in February, while capacity increased year on year by 1.0%. Year to date demand (the months of January and February) increased by 16.2%, helped by very strong growth on the trade lanes to and from Asia. The increase in demand helped the region’s seasonally-adjusted load factor rise by 2.8 percentage points in the first two months of this year.