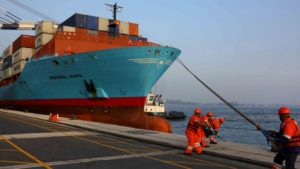 Maersk will sell Mercosul to satisfy Brazilian regulators.
The European Commission has approved Maersk Line’s bid to acquire Hamburg Süd on the condition that Hamburg withdraws from alliance networks on five trade routes.

The routes include connections between Northern Europe and Central America, the west coast of South America and the Caribbean; between the Mediterranean and the west and east coasts of South America; and between Northern Europe and the Middle East. The commission assessed that there would be insufficient competition if Hamburg Süd continued to participate in alliance routes serving these markets. The routes include Eurosal 1/SAWC and Eurosal 2/SAWC (recently fused into the Eurosal XL service), EPIC 2, CCWM/MEDANDES and MESA. Hamburg Süd is not a formal member of a global alliance, but it has cooperated with CMA CGM and others via slot-sharing agreements.

“Competitive shipping services are essential for European companies and for the EU’s economy as a whole,” said EC commissioner Margrethe Vestager in a statement. “The commitments offered by Maersk Line and HSDG will maintain a healthy level of competition to the benefit of the very many EU companies that depend on these container shipping services.”