Wells Cargo > News > Seafreight > In Depth: Dutch Ingenuity at Work with The Expansion of The Panama Canal 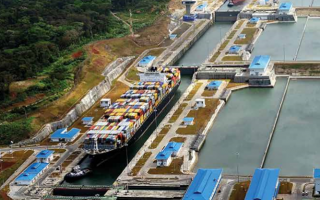 Last March, it was announced that the Panama Canal Authority (ACP) ordered a vessel scheduling and maritime resources management system called Quintiq. A Dutch software company developed the system and this is not the only innovation the Dutch brought to the new Panama Canal.

The expansion of the Panama Canal was completed last summer. The project, also called the Third Set of Locks Project, doubled the capacity of the Panama Canal by adding a new lane of traffic allowing for a larger number of ships. The width and the depth of the lanes and locks were also increased, enabling larger ships to pass.

All this marine traffic needs a system that gives oversight. That is why the Panama Canal Authority selected Quintiq to plan, schedule and optimise all vessels transit operations through the Canal to reduce costs, improve safety and increase overall efficiency and reliability.

With the software, for the first time, the Canal will be able to execute a completely integrated operating plan for all of its critical resources, including tugboats, pilots, and line handlers. Improved situational awareness and data can result in better decision-making, which in turn will help mitigate operational risk. Further, Quintiq will help reduce costs by optimising the way in which the Canal plans and programs its resources.

The first steps for this system were taken in a small office in the city of ‘s-Hertogenbosch in 1997 by a group of five software developers. Today, approximately 12,000 users in over 80 countries rely on their software to plan and optimise workforces, logistics and production. Quintiq is part of Dassault Systèmes.

“This system will help us to tap the potential of technology to provide better solutions for our customers as we increasingly manage more transits and adapt to shifts in global trade,” Jorge L. Quijano, Panama Canal Administrator, said.

Canal customers will benefit as well. The software will impact shippers looking to transit the waterway by shortening vessel waiting times, increasing the number of potentially available vessel slots each day and improving the overall reliability of the route.

Rob van Egmond, Quintiq CEO, commented: “We are confident that the Quintiq solution will help the Panama Canal achieve greater profits and help many more ships transit the Canal in the coming years.”

Quintiq will be fully integrated into Canal operations over the course of the next two years. The module responsible for managing the Canal’s vessel scheduling is expected to be operational in September 2017.

Other Dutch companies also worked on the expansion project. The Iv-Groep, a consulting and engineering company with its headquarters in Papendrecht, designed sixteen lock doors for the new lock complexes in the Panama Canal.

Like the existing locks, three different levels will be constructed one behind the other, raising ships from sea level to Lake Gatun at 27 metres above sea level.

The locks are 60 per cent wider and 40 per cent longer than the old ones, and each has three chambers. Double doors are being installed between the different levels to meet the stringent reliability and availability requirements. The doors must be capable of withstanding hugely fluctuating water pressures, ship collisions and earthquakes.

Iv-Groep was responsible for designing the new lock doors and the transmission mechanism, including the operating system, RAMS analysis of the entire lock complex, and the supervision of construction work in progress. The lock complex walls are made of concrete and are up to 33 metres in height.

On the outside, they taper down to a width of 30 metres at the base. The double lock doors are made of steel and are 31 metres high, 57 metres wide and 10 metres thick. Each door contains an average of 3,500 tonnes of steel.

Another Dutch company also used their ingenuity on the Panama Canal project. The company, QuayQuip, designed a new type of wheel fenders to guide the ships into the locks. The new wheel fenders meet the demands for the new Panama Canal.

These new tugs fulfill the requirements of the Panama Canal Authority as more powerful vessels, of at least 80 tonnes bollard pull, are needed, given the ever-increasing size of vessels.

This article was previously published in Maritime Holland edition #2 – 2017.